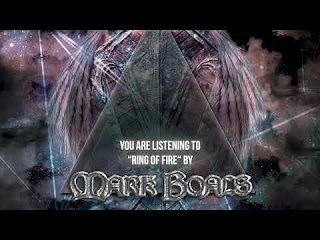 From the album "All The Best!". Buy or Stream: https://orcd.co/allthebest

Respected metal vocalist Mark Boals has announced a two album ‘best of’ collection, "All The Best!", covering his work both as a solo artist and with his band Ring Of Fire. Doug Aldrich, Tony MacAlpine, Jeff Kollman, Neil Citron, Vitalij Kuprij, Vinny Appice, Virgil Donati, Erik Norlander, Chris Brooks, and Steve Weingart are the list of musicians who have recorded with him on these efforts over the years.

Mark Boals says, "I am very happy and proud to announce the release of this collection of my solo and Ring Of Fire band albums! Included are songs from my first solo album, which was only released in Japan and is very hard to find (rare), with guitars by the great Doug Aldrich. My second solo album turned into the band Ring Of Fire later on, because the lineup was too good to only work together on one album, and I wanted it to continue, which it did, for four more studio albums. With Tony Macalpine and Virgil Donati working together, there was a chemistry of genius, and with the addition of Vitalij Kuprij, it made a magnificent blend of magic!"

Continues Boals, "On my "Edge Of The World" solo album, I worked with several other great musicians and a hero of my childhood and the best hard rock drummer in history, Vinnie Appice! When I listen to all those very high notes I had sang, and the incredible amount of virtuoso notes played per song, I surprise myself sometimes, hahaha! We were all pushing ourselves to newer heights of excellence in those days. A lot of good memories come back when I hear these songs...Riding motorcycles around Los Angeles with Tony Macalpine and always ending up hanging out on the beach drinking beers til the wee hours...Having Snoop Dogg in the next room of the studio we were recording in (Paramount Studios), and having him listen to our music and telling me that I needed to smoke something with him, LOL, and it DID help hahaha. Recording keyboards in a Beverly Hills mansion belonging to a famous movie star friend, with Vitalij Kuprij, and drinking rare whiskey together after the sessions and talking all night..."

Boals concludes, "I really enjoyed making these albums and I hope you will enjoy just as much listening to them too! Wishing good times, good health, and happy listening to all!"

Mark Boals is one of the signature voices of the Neoclassical Metal subgenre. This is no surprise to fans of the genre as Mark fronted Yngwie Malmsteen's 'Rising Force' in 1986, releasing the now legendary album “Trilogy” along with five more albums and some long-form videos over the years.

In 2002, he launched his own band “Ring of Fire” (based off the title of a previous solo album) with members Tony Macalpine, and later on George Bellas, on guitar, Virgil Donati on drums, Philip Bynoe on bass, and Vitalij Kuprij on keyboards (and on "The Oracle" album George Bellas). The band went on to release four milestone albums and one live CD/DVD recorded in Japan.