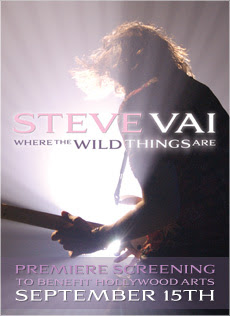 Red Carpet at The Egyptian Theatre in Hollywood on September 15th

This Event Will Benefit Hollywood Arts

Grammy-award winning guitarist Steve Vai announces a premier screening of his concert filmLive In Minneapolis - Where The Wild Things Are at the Egyptian Theatre in Hollywood on September 15th. Attendees will have the rare opportunity to view the concert film in its entirety and also listen to Vai and his band members discuss the making of the film, as well as the behind-the-scenes details of the tour.

The screening will be open to the public and proceeds from the event will benefit Hollywood Arts, an arts academy that provides creative and commercial art instruction to homeless and at-risk youth. Vai has been a member of the board of directors for Hollywood Arts since 2007. Visit www.hollywood-arts.org

“I’m thrilled to be sponsoring this event in support of such a vital organizations as Hollywood Arts. I have personally seen how this institute has mended broken spirits and changed the quality of people’s lives while cultivating them to become valuable contributors in building a healthier society.” says Vai.

Music celebrities from all walks are donating items for a silent auction that will be held at the Egyptian on the night of the screening. There will also be an Ebay and live auction to help raise funds and awareness for Hollywood Arts. We will have a list of items and photos available shortly.

2010 will mark Vai's 30 year touring anniversary. Vai first stepped into the spotlight in 1980 as a guitarist in Frank Zappa's band but his indelible contribution to music came during his solo career, which includes combined sales of nearly six million albums. Live In Minneapolis - Where The Wild Things Are was filmed during Vai's sold out Sound Theories tour which spanned several continents. The film is scheduled to be released on DVD and Blu-ray Sept. 29th. A live audio CD that contains select performances from the DVD will also be released on Sept. 29th.View the trailer and read more information here.

Tickets are on-sale on Friday August 14 at 5:00pm PST and are only available through Vai.com.

The schedule for the event is as follows:

If you have questions about the event, or the EVO Experience tickets, feel free to ask them here.