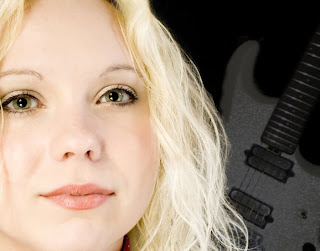 Realising at an early age that if you picked up a guitar you got attention, especially from her dad whose guitar it usually was, it was inevitable that she would get one of her own. So at the ripe old age of three, she got her first guitar, a half size acoustic.

At seven she started lessons but soon noticed that not only did the electric guitars have a smaller neck, making them ideal for little hands, but they could also make a lot more noise. After more lessons and a lot more noise, and at the grand old age of eight she became the youngest person in the country to pass a Rockschool grade. More lessons followed and with them came the realisation that if you want people to listen, you need to sing!

So it came to pass that at the age of twelve she arrived at the famous Melborn Hotel in Bradford to play and sing at the weekly jam session. Helped and encouraged by all the musicians, she developed rapidly into a incredible rock and blues musician.

Now described as a "prodigy", a visit from a major label soon followed and at fourteen she was told "great voice, but girls don't play guitar like that!" by the head of their A&R. Their advise to change styles because boys would be intimidated was met with an attitude of "that's their problem! I'm not changing!" Singing and playing on national television and radio soon followed.

A meeting with two renowned producers soon lead to a change in direction from live performance to recording and writing. This coupled with exams and advice meant an end to live performing for around four years. As seems common in the music industry, once lawyers get involved, things can get messy!!!!!

Now qualified at grade eight and the holder of the prize for outstanding musicianship at the world renowned Leeds College of Music for 2006/2007, a chance meeting with a well known local band saw Chantel back at what she does best! - singing and playing with feel to die for - Which lead to the formation of the rock blues trio, the Chantel McGregor Band.

Whilst playing extensively around the North of England, she continued her studies at Leeds College Of Music achieving a BA, first class honours degree in popular music in July 2009.


Up in the Sky performed by The Chantel McGregor Band