on April 13, 2010
Chris Feener has a new band... check it out! http://www.myspace.com/sixstoryremedy 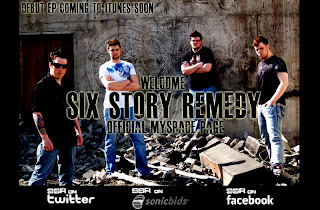 Six Story Remedy is a newly formed band based out of Grand Falls-Windsor, Newfoundland. It features drummer Brandon Hopkins, (former attendee of Musician’s Institute in Hollywood, California) vocalist Adam Cross, (Canadian Idol 2004 successor), Chris Clarke (graduate of MIP and RA programs at CNA in Stephenville) and Chris Feener (International Guitar Idol 2008 top 10 finalist). The band is a product of many hours of hard work and intensive auditioning. Stylistically, it’s a very high energy hybrid of alternative and hard rock. Six Story Remedy has a very distinct sound and is one that has been deemed desirable by many age groups; the appeal from song to song with regards to lyrical content and high energy musicality has been a very successful duo.
Every member of the band, in their own right, have been successful in music due to sheer determination. Chris Feener, former guitarist of Minneapolis, Minnesota-based heavy metal outfit “Epicurean” has worked diligently on several projects over the past few years, and had the opportunity to tour North America along side thrash metal legends “Exodus” and “Kreator” this past summer. Having been placed within the top 10 World Guitar Idol’s in 2008, his career has been steadily progressing. His time in Grand Falls-Windsor has been spent playing with local cover band “Papa String”, teaching guitar lessons on behalf of Yamaha Canada, and performing guitar clinics for groups of young and aspiring musicians.
Adam Cross, former resident of Port Aux Basques (now residing in Grand Falls-Windsor) has been driven from an early age to be an entertainer, and not just a vocalist. His on-stage antics and ability to command an audience is as excitable as his vocals. In 2004, Adam traveled to St. John’s and performed before Canadian Idol judges. After successfully making it through the first two “pre-screen” judging panels, he performed before celebrity judges and received a golden ticket to fly to Toronto as part of the top 100 out of 16,000 possible Canadian competitors. Hard Fought Happiness, his home-town band, won the 2007 provincial Battle of The Bands competition in Stephenville with Adam at the helm. Combined with his intensive vocal ability, his impressive guitar skills contribute to the band and add a definite zing to the music of Six Story Remedy.
Bassist Chris Clarke, formerly of Port Aux Basques moved to Grand Falls-Windsor in early February. His drive to perform lead him here and his impressive abilities and experience is what makes him a perfect fit. Coy Decoy, Chris’ Stephenville-based trio (along with drummer Brandon Hopkins) received top honors in 2006 when they took first place at both regional and provincial Battle of the Bands competitions. They were rewarded the ability to tour Newfoundland and Labrador, performing each and every Arts and Culture Center venue along the way. Having achieved diplomas in both “Recording Arts” and “Music Industry and Performance” courses at College Of The North Atlantic in Stephenville, he is well versed in many aspects of the music industry.
Drummer and musician Brandon Hopkins ties Six Story Remedy together with his solid grooves, musical expertise as well as technical abilities. After completing the “Music Industry and Performance program (MIP)” at CNA in Stephenville, his personal drive, determination, and sheer talent brought him all the way to Hollywood, California; where he attended Musician’s Institute (an accredited member institution of the National Association of Schools of Music with three stories and 60,000 square feet of world class recording and performing facilities). Brandon returned to Newfoundland in December of 2009 and now resides in Grand Falls-Windsor. He owns and operates a brand new home-studio, and regularly does session work/recordings for artists across the globe.
Due to perform in St. John’s this coming April before Universal and EMI record executives, Six Story Remedy is hopeful to make as many connections as possible and ultimately get signed as a touring act. They are busy working towards arranging a summer Maritimes tour and will be hosting their first CD release party in May of 2010.