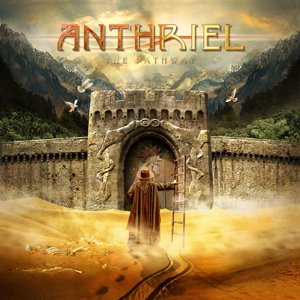 Formed in 2004 by guitarist Timo Niemistö, keyboardist Antti Hakulinen and drummer Jari Kuokkanen the band went through a couple of line up variations before finding bassist Klaus Wirzenius and ultimately released a 3 track e.p. “Visions of Inner Light and Deeper Thoughts” in 2007 which won considerable praise on the underground metal circuit. Yet it was until the band found powerhouse vocalist Simo Silvan in 2008 that the bands sound became fully realised.

Anthriel - the Archangel of balance and harmony is the perfect name for the bands music. With a sound driven by big guitar riffs, deft keyboard touches, a rock solid articulate rhythm section and a healthy dose of expressive vocals high in melody built into intricate yet digestible arrangements this is metal that is easily appreciated on first listen – yet where further plays reveal numerous hidden depths that will keep the listener coming back for more. The quality of material would not be best represented with anything less than a superb production and this is exactly what the “The Pathway” serves up being an impressive self production by Timo Niemistö and mix by Jussi Kulomaa at MSTR Studios.

On the bands sound Simo Silvan comments, “We don't want to go extremity with any style of music. There is a time for a head banging and time for musical landscaping. We try to keep our music as versatile we can. "The Pathway” is a mixture of various different kind of music styles like heavy, pop, acoustic, orchestral and instrumental and symphonic metal. The music and lyrics were written hand in hand with the album theme”.

Thematically “The Pathway” is a concept based on a sequence of individual songs and themes with inspiration coming from R.A. Salvatore's Forgotten Realms: "The Dark Elf Trilogy".

On the basic premise of “The Pathway” Timo Niemistö comments, “The Pathway is the story of a man who finds himself grown against his former principles and philosophy of life. He decides to leave his past behind and begin a journey to find his own personal promised land and balance. As the path gets rough good and evil starts to battle in his mind where the reality and fantasy gets mixed. He puts the blame to the Gods for playing with his life and turns his adversities to the divine entertainment with consequences that ultimately lead to the discovery of perfect harmony from within his own soul”.

This compelling story is a captivating lyrical theme for the first class musicianship on offer all of which comes together to make “Anthriel – The Pathway” a serious contender for best newcomers in progressive metal in 2010.