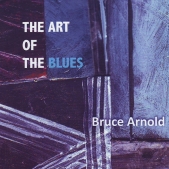 Bruce Arnold: The Art Of The Blues (CD) http://www.guitar9.com/theartoftheblues.html

Great musicians have been doing their own take on the blues since the form was created, and now Bruce Arnold joins their company with The Art Of The Blues. Arnold has exhibited astonishing versatility with his various projects, tackling pieces as disparate as Olivier Messiaen’s “Quartet for the End of Time” and Native American chants. He is best known however, for his explorations into the application of 12-tone theory in jazz improvisation. Arnold here applies a similar intellectual rigor to the 12 tracks that are by turns lyrical, spare, haunting and always intriguing. As Bruce explains it: “In The Art Of The Blues I have applied the structural rhythmic and harmonic ideas that I have been working with over the past several years to the blues form. These structures deal with small three note groups and the superimposition of time fields over a basic pulse. I’ve used the unit of a half step and a minor 3rd as my motif, and composed twelve blues, one in each key. You’ll also hear some fun with time signatures and the use of a dotted quarter note as a vehicle for multiple time layering.” Joining Bruce on this bracing set and negotiating the tricks and turns are stalwarts Tony Moreno on drums and Dean Johnson on upright bass. Although Bruce’s composition is forward thinking, his chordal accompaniment style throughout Art of the Blues conscientiously harkens back to the roots of Rhythm and Blues guitar. All these elements combine to create a collection of tunes that while sounding like a traditional jazz guitar CD also presents a personal new approach and direction for the blues. 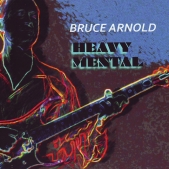 Reviewer Bill Milkowski says it better than we can, "The outcome of this inventive trio session is a fresh amalgam of visceral rock bombast, jazzy harmonies and cutting edge sonics, the likes of which haven’t been heard since Terje Rypdal’s wildly experimental mid ‘80s power trio, The Chasers. His 28th release overall, Heavy Mental is easily Arnold’s most hard-hitting and audacious outing to date. In 2001 Bruce Arnold came out with “Give ‘Em Some” a jazz-rock n’ funk blast. Now Arnold comes roaring back with Heavy Mental, another return to his love of all-out electric guitar-driven, distortion drenched, high octane music. But as with all of Arnold’s ventures, this is music with an intellectual backbone. Arnold brings to bear all his investigations into 12-tone theory, hexatonics, and sound collage (Using SuperCollider) and together with Andy Galore on Bass and drummer Kirk Driscoll creates a powerful and mature musical statement that satisfies on every level. In the 9 years since Arnold’s ground breaking “Give ‘Em Some” he has immersed himself in a plethora of differing genres. From exhilarating jazz adaptations of 20th century classical masters, to straight-ahead-with-a-twist jazz duets, Arnold has relentlessly pursued his passion for musical innovation. Heavy Mental comes full circle in a sense, as he returns to his rock roots, bringing along a rucksack of theoretical constructs, all of which have been thoroughly explored. Sit back, turn up the volume and get ready for some serious musical stimulation."