Chris Montague: Troyka - sure to appeal to Wayne Krantz fans 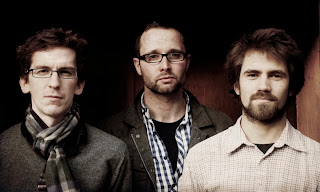 In 2009, London based trio TROYKA, featuring Chris Montague (guitars), Kit Downes (organ) and Joshua Blackmore (drums) released one of the most revered and highly acclaimed albums of the year, pushing them to the forefront of the British Jazz Scene. With performances throughout the UK including some of the most prestigious festivals (London, Glasgow and Cheltenham), TROYKA emerged as the band everyone was talking about.

Now, just over two years down the line, TROYKA have struck gold with a sensational album and one that will send shockwaves throughout European Jazz scene. Due for release in June 2012 on Edition Records, the album has a maturity about it usually only evident in fourth or fifth albums, not second albums. The music is compelling and demands your attention from start to finish and the listener can't help but be drawn in. It's fuelled by textural guitar loops, angular riffs and displaced drum grooves combined with an evocative lyricism that is utterly absorbing all developed by three great musical minds with their own distinctive approach to making music. But it's their collective spirit, their desire to connect and excite that makes this band really come alive. Highly impressed with Troyka, legendary composer Django Bates wrote a new set of music around the trio which was commissioned by Cheltenham Jazz Festivals and broadcast on Radio 3 in May 2011.

Watch this space -- if Troyka can produce the sort of buzz they did from the first album, imagine the possibilities of the second. Something magical is about to happen!

TROYKA WILL BE TOURING EXTENSIVELY THROUGHOUT MAY / JUNE 2012