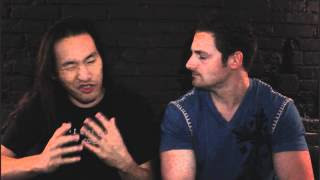 Matt Bishop sits down backstage with guitarist Herman Li of DragonForce on the band's 2012 Power Within World Tour. The band is supporting their latest album, The Power Within, on a massive world tour run. They chatted about the new record, their signature style, and Guitar Hero. CRANK IT UP!