Scottish singer-songwriter and multi-instrumentalist, Sandi Thom, best known for her 2006 No.1 hit single I Wish I Was A Punk Rocker (With Flowers In My Hair), is pleased to confirm the August 27th release of her fourth studio album Flesh and Blood. Produced by the Black Crowes’ Rich Robinson, and featuring a rare duet with Buffy Sainte-Marie, the album and was recorded at 16 Tons studio, Nashville, Tennessee. Sandi will embark on a nationwide UK tour in support of the new album, which begins at the London Islington Academy on Thursday November 1st 2012.

Sandi's new song, Sun Comes Crashing Down will be available as a free download from www.sandithom.com on Monday May 21st. 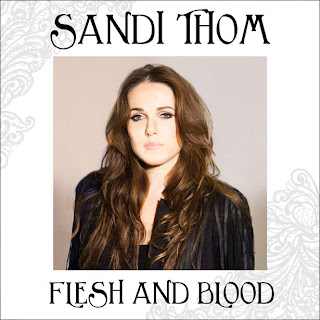 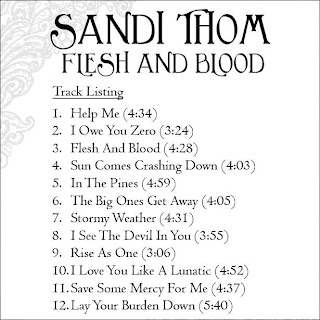 Flesh and Blood is a significant release, being Sandi’s sophomore studio album, released solely by her independent label Guardian Angels Records (distributed in the UK by Nova through Universal Music Operations). The highly anticipated new album radiates the raunchy blues rock bravado of the opening track Help Me, followed by the country-flavoured Leadbelly classic In The Pines. The album also features the strutting, clavinet-led Stormy Weather; and the emotionally compelling finale Lay Your Burden Down.

Sandi really stretched herself and made a bold new album,” reflects Rich Robinson, “Her songs are honest, vulnerable and very strong. Her vocal abilities are showcased really well, as is her guitar work, and harp playing. I think Sandi’s made a great record. It was a joy to work with her.”
Classic rock producer Kevin Shirley (Led Zeppelin, The Black Crowes, Joe Bonamassa) also mixed two tracks, Sun Comes Crashing Down and a duet with Buffy Sainte Marieon the latter’s classic song, Big Ones Get Away. “Sandi’s writing is fantastic,” says Shirley, “and her singing is wonderful. Sun Comes Crashing Down has all the right ingredients to be a hit.”
Read the official web release, featuring the Making of Flesh and Blood EPK and a full list of UK tour dates HERE.

Sandi's first single from her album "Merchants and Thieves" is available to download from I-Tunes worldwide NOW!!!
http://itunes.apple.com/gb/album/this-ol-world-feat-joe-bonamassa/id361308113