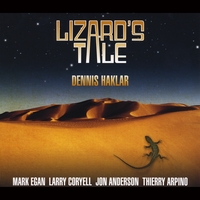 "Dennis Haklar asked me to sing on his very inspired album earlier this year, we had already been working on a large scale project dealing with Ancient Asian music, so it was such fun to hear what he was creating. I said I would enjoy singing ideas as they came to me, and to join vocally with such great musicians. It has been a pleasure for me to sing on this album, I hope that people will find time to relax and enjoy." - Jon Anderson

Hailing from Amboy, New Jersey, Haklar studied jazz guitar at an early age. At Rutgers University he became interested in Electronic music and worked with a modular Arp 2600 synthesizer with many osc modules, sequencing, as well as several reel-to-reel tape machines, creating sounds in unorthodox ways. After college he joined the Improvising Structures Ensemble, which was an avant garde outfit that performed the music of John Cage, Terry Riley, as well as original compositions. Dennis entered one of his pieces into a young composers competition and won a student membership to IRCAM in France. This culminated in a master class with Pierre Boulez at Carnegie Hall; an evening he conducted and premiered his masterpiece "Explosante Fixe". Haklar confesses "I was never the same after that divine experience!"

And how did Dennis Haklar secure such music icons as Jon Anderson and Larry Coryell to perform on his debut album? Dennis explains, "A few years ago I began to collaborate over the internet with Jon Anderson on a large-scale work. Charka Music, very involved. I had also sent him some music I had written. He sang on several pieces and we continue to collaborate. When I was working on composing the music to 'Lizard's Tale', I had sent Jon four compositions we had just recorded in the studio – 'Leap Of Faith', 'Prelude To Dawn', 'Dawn Of An Era' and 'Crossing Over'. He quickly responded with the perfect vocal tracks and really helped convey the meaning of the songs. I love working with Jon!" As far as connecting with guitar legend Larry Coryell, says Dennis, "I had known Larry Coryell for several years studying jazz improvisation and composition with him. I had presented some songs to him that I was preparing for this project and asked if he would be interested in playing on the recording session and producing it. He agreed and we got to work straight away. We had composed the title track in one sitting. As the project developed we had agreed that the best rhythm section for this would be bassist Mark Egan and drummer Thierry Arpino."

"This was a great session - it was a real 'Jersey-New York' thing complete with bedbugs in the hotel down the street from the studio, which was either too hot or too cold - plus there was all kinds of equipment and mechanical problems. Nothing went smoothly - hence it was a great record, sometimes it's like that. Dennis's European-inspired work ethic also paid off - especially for his compositions and arrangements. One twelve-string part he wrote for me was not easy to play, and he was makin' me sweat - but I got it after he showed me the correct fingering. Mark Egan and Thierry Arpino were superb - we've been playing together for some years now, and they are a tight team. I was blown away by the beautiful contribution made by the great Jon Anderson - I've always been a fan, and he certainly has evolved to a special place in the vocal spectrum. And so in tune!! It was a crazy session - and a good one - that's why I nicknamed this date as 'Denny and the Mad Hungarians'." - Larry Coryell

The concept behind 'Lizard's Tale' is awareness. The lizard represents friendship, and is quick to escape from harms way. The lizard can survive for long periods of time in harsh environments. The pieces on 'Lizards Tale' evoke the ability to look inward for peace and harmony with the universe, to flow with it. "Leap Of Faith" is about courage to face the unknown and leap without fear. "Dawn Of An Era" is about the realization that this is not the same world as your fathers and we must adapt to survive, like the lizard. As the lizard runs across the desert, he looks to the heavens and dreams of crossing over. We journey with the lizard.

In closing, Dennis has this message to impart to his listeners: "Look inward to find that place of peace. Move towards the realization that we all come from a place of love. There are always conflicts surrounding. Unrest is an ever-changing world. Let go of bad energy and amp the good. My wish is that people hearing the music will become a part of it, and allow it to become part of them."