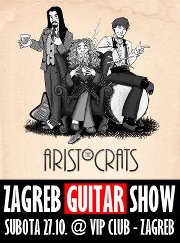 Will interest in the music of Guthrie Govan at last year's Zagreb Guitar Show surpass this year's appearance The Aristocrats, in which they play except Guthrie and Marco MINNEMANN and Bryan BELLER? During that will convince all those who visit 27.10. Zagreb VIP Club, which this year will host all applications Zagreb Guitar Show. The Aristocrats, which some call 'heavy progressive rock,' and others 'superb fusion', created in 2010. as a product of playing in one NAMM show, when Guthrie Govan at the last