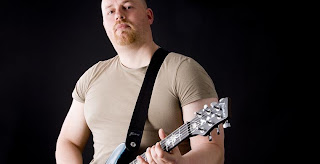 High Noon – take on our man in black Hayden Hewitt

Conrad Harpham started playing the guitar at the age of15. In five years he had started to teach, and had received acclaim for his first demo project “Planet X” from a national music magazine, which compared his playing to Joe Satriani.

Over the next few years Conrad developed a fluid rock style, incorporating influences from Randy Rhoads, to Satriani and Richie Kotzen.

In 2000 Conrad won a regional Heat of the Competition “Jam 2000” and in the grand final at Birmingham NEC he traded chops with Andy James and Jamie Humphries (Lick Library) whilst coming in the top 5 out of 15 national finalists.

In 2006 he joined Jazz funk outfit “Dimitri” and also formed “The Conrad Harpham Trio”, who have been performing live at various venues across the South West. In 2007 Conrad won the prestigious “Outstanding musician” award at the Devon Battle of the Bands competition. The bands’ 2008 release “Conradical” prompted “All Out Guitar Magazine” to describe Conrad as “A simply phenomenal Guitarist”, and “Cross Rhythms” said of the CD, “A mesmerising display of solo electric guitar at its finest…”

Conrad received Honourable mentions for top 20 placings in international guitar idol 2008 and 2009, and in 2011 was a finalist in the UK Guitarist of the Year competition.