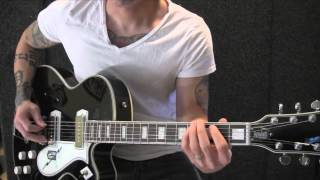 Eastwood Guitars brings back the past with the introduction of the big and beautiful Airline Espanada. This striking guitar is based on the popular Harmony H63, which was also sold under the Silvertone and Airline brands in the late 1950s. It is a new lightweight, full hollow body model that is the big brother to the highly successful Airline Tuxedo. The Espanada is a versatile guitar offering a tonal palette from Jazz to Jump Blues to Rockabilly – it is players’ guitar as shown in this video by R.J. Ronquillo


The Airline Espanada is a 25 1/2” scale guitar with a full hollow body made with maple top and back with mahogany sides. It has a set, bound maple neck with rosewood fingerboard, block markers and 1 11/16” width at the nut. This guitar is built with top-notch components like a TonePros® Tune-O-Matic bridge, trapeze tail and Grover style tuners. It features a 3-way switch for the two Custom Hi-Output P-90s and dual volume / tone controls with cupcake knobs. The retro look is enhanced by the vintage Airline “Coat of Arms” logoed pickguard and the thick white binding on the body and the headstock. It comes with a deluxe Hardshell Case and it is also available in a left-handed model.

“I’ve loved the Espanada since I was a kid" said Mike Robinson, President and founder of Eastwood Guitars, "and after the overwhelming success of the Airline Tuxedo, we knew it was time to bring the Airline Espanada to market.”

The Airline Espanada model is available now at Airline Dealers around the world, to find your closest dealer visit www.eastwoodguitars.com