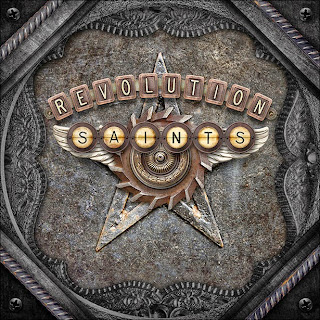 REVOLUTION SAINTS is the new hard rock / melodic rock eponymous debut album from Doug Aldrich (ex-Whitesnake), Jack Blades (Night Ranger) and Deen Castronovo (Journey). The new album will be released on CD, Deluxe Edition, Digital Download and 180 gram vinyl by Frontiers Records in Europe on February 20, in the UK on February 23, and in the USA on February 24.

Superbly handling drums and lead vocals is Deen Castronovo. Already renowned for his drum talents and backing vocals in Journey, Bad English and more, Deen's excellent vocal talents are in the spotlight on the album. On bass, and co-lead vocals on a few tracks, Jack Blades is well known for his melodic, yet hard rocking approach to songwriting and playing via multiple classic albums by his main band Night Ranger, as well as with the Damn Yankees and the Shaw/Blades releases.

On guitar, Doug Aldrich was excited to lend his fiery blues guitar attack to such a unique and melodic band. Doug, who just left Whitesnake after a fruitful 12 year run (including co-writing 2010s critically acclaimed "Forevermore" release) and also of Burning Rain and formerly of DIO, has a deep pedigree and is one of today’s most respected guitarists.

The debut album brings back the classic melodic rock style to where it should be: inspiring, uplifting vocals, soaring melodies and musicianship to die for, and features special guests including Alessandro Del Vecchio, and Journey’s Neal Schon and Arnel Pineda.

ALBUM TRACKLISTING
Back On My Trail
Turn Back Time
You're Not Alone (Feat. Arnel Pineda)
Locked Out Of Paradise
Way To The Sun (Feat. Neal Schon)
Dream On
Don't Walk Away
Here Forever
Strangers To This Life
Better World
How To Mend A Broken Heart
In The Name Of The Father (Fernando's Song)