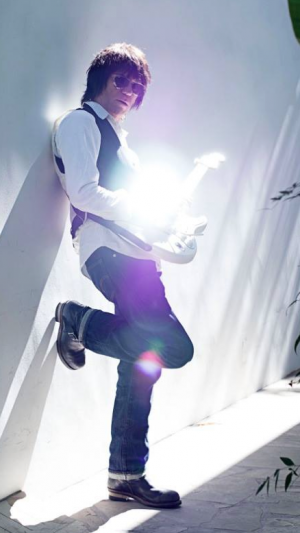 (Los Angeles) Announced today, the legendary JEFF BECK has signed an exclusive publishing deal with the London-based Genesis Publishing Group. Plans to release a high quality ‘signed, limited-edition’ book are in the works for release in the last quarter of 2015. In addition, BECK is hard at work on an officially sanctioned documentary and is currently penning his own autobiography.

BECK would like his fans to know, that while others may release un-authorized documentaries and biographies, these forthcoming works will be the only authorized versions by BECK himself.

Beck's career took off in the mid-1960s, after replacing Eric Clapton as lead guitarist for The Yardbirds on the recommendation of his friend Jimmy Page. Over the years, Beck has collaborated with Stevie Wonder, Diana Ross, Mick Jagger, Tina Turner, Roger Waters, Les Paul, Jon Bon Jovi, Stanley Clarke, Herbie Hancock and Joss Stone among many others.

Beck has twice been inducted into the Rock and Roll Hall of Fame: once with The Yardbirds in 1992 and once as a solo artist in 2009. He has won numerous Grammy Awards, including two at the 2011 Grammy Award Celebration when he won Best Rock Instrumental Performance for “Hammerhead” and Best Pop Instrumental performance for “Nessun Dorma”, both from his last studio album, Emotion & Commotion.

Recently, in London, Beck participated in The Poppy Appeal song "No Man's Land", a tribute to the men and women that served in World War I, resulting in 4 performances, culminating in the NFL pre-game entertainment that was broadcast from Wembley Stadium. The song featured singer Joss Stone on vocals and a gospel choir with vocals arranged by Antonia Wilson. In the meantime, a DVD of Beck’s Tokyo concert from April 2014 was released last November and reached #1 on the Billboard DVD chart. For Beck, 2015 will include both solo tour dates as well as co-headlining dates with ZZ Top and will complete work on his new studio album, expected later this year.

Joining Beck on both the solo and double-bill tour are his band: Jimmy Hall on Vocals, Rhonda Smith on bass, Jonathan Joseph on drums and Nicolas Meier on guitar