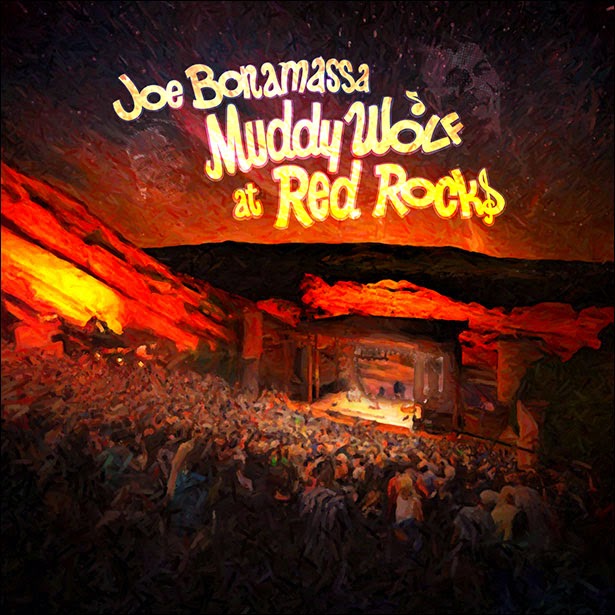 "They always try to write off the blues; well we’ve proven tonight that at least 9,000 people like the blues," says celebrated blues rock master Joe Bonamassa who releases "Joe Bonamassa – Muddy Wolf At Red Rocks" on DVD, Blu-ray and CD set on March 23, 2015.

The exclusive concert experience, which is a tribute to blues legends Muddy Waters and Howlin’ Wolf, was filmed at Red Rocks Amphitheatre over Labor Day weekend 2014. Click here for the official web release and hi res photos - www.noblepr.co.uk/Press_Releases/joebonamassa/muddywolfatredrocks.htm.

The celebrate the release, Joe is offering fans a free MP3 download of the live track “Tiger In Your Tank”. Download if for free HERE - www.unlock.fm/17t.

Carved into the bedrock of Colorado’s majestic Rocky Mountains, the famed amphitheatre sets the stage for Bonamassa’s fiery delivery of over 2.5 hours of bluesy guitar-wailing and horn-filled tunes honouring the two Blues greats. Playing to a sold-out crowd of 9,000 fans, this marks the biggest show of Bonamassa’s career, a major milestone for the bluesman.

The Blu-ray and DVD contains over 1.5 hours of bonus features including exclusive behind-the-scenes footage, photo gallery, historic footage of Muddy Waters and Howlin’ Wolf, and a featuretteof Bonamassa and producer Kevin Shirley’s trip to The Crossroads.

Unlike any Bonamassa show before, Muddy Wolf marks the start of a tribute concert series that will display a different band and catalogue of material that will vary from Bonamassa’s music as a solo artist. For Muddy Wolf, songs were carefully selected from the catalogues of Howlin’ Wolf, one of Chicago’s most influential bluesmen, known for his deep, scratchy voice, and Muddy Waters, considered the "father of modern Chicago blues."

Muddy Waters was a major inspiration for the British blues explosion of the 1960s, a genre that has heavily influenced Bonamassa’s original music throughout his career. The concert features a selection of songs from each artist, followed by a 30-minute set of songs from Bonamassa’s own extensive catalogue, plus a line-up of players different from Bonamassa’s touring band, dubbed the "Muddy Wolf Band" which includes Anton Fig (drums), Michael Rhodes (bass), Reese Wynans (piano, Hammond organ), Lee Thornburg (trumpet, horn arrangements), Ron Dziubla (saxophone),Nick Lane (trombone), Mike Henderson (harmonica), and Kirk Fletcher (guitar).

1. Tiger In Your Tank

1. How Many More Years


i. Band and Introductions

1. Joe and Kevin’s Excellent Adventure… to The Crossroads