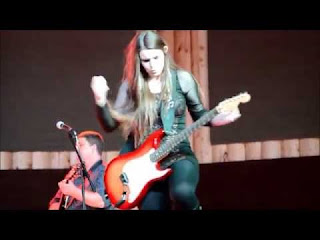 
That's right, folks, I got Ally Venable with the Ally Venable Band with Zack Terry on bass guitar performing at the 2015 East Texas Music Awards!

This young and oh, so talented artist was also nominated for 2015 Single of the Year for her self-penned song "Trainwreck Blues", as well as her band grabbing a nomination for 2015 Rock Band of the Year. Be on the lookout for Ally, she's starting young and unarguably has a long and illustrious career ahead of her.

You can follow the Ally Venable Band on facebook at https://www.facebook.com/AllyVenableB..., and you need to; she'll be at the 11th Annual T-bone Walker Blues Festival in Longview, Texas which will happen on June 3 & 4, 2016. (https://www.facebook.com/T-Bone-Walke...) Come see her and a whole bunch of great Blues artists then.

Of course, you'll be wanting to find East Texas Music so you can nominate and vote for your favorite East Texas musicians in 2016, too. You can do that at ETXmusic.com or on facebook at https://www.facebook.com/EastTexasMus....

While you're waiting for the nominating and the voting to begin, get out there and see some local live music.
#supportlocalmusic #supportlivemusic #etxmusicrocks