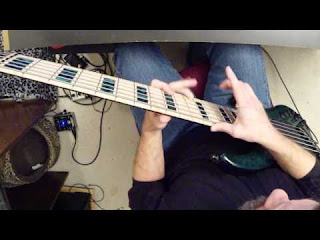 Okay.. so late last year when I hit Sheldon up for a NAMM badge, he one-upped me and asked if I'd demo this new bass at his booth this year. So, taking into consideration that one of the reasons Dingwall signed me as an endorser in the first place is because I showed no fear in unleashing a blazing bunch of flashy fanned-fret fiddlybits when I picked one up for the first time in 2001, (and it being NAMM, after all), I worked up this medley of some of the showiest parts of a few Haji's Kitchen songs and also one of the difficult new Eumeria songs (Shiitake.. already uploaded a playthrough last year).

Both the video and audio are a "best of" of the 6 passes I did. I used two cameras for each pass, with mostly different angles. I'd rather have just pulled the audio from one perfect take, but there weren't any of those.. this medley is akin to an Olympic gymnastics routine, in that it's tough to nail every element 10/10 every time. So, no "punching in" per-se, and all of the transitions from part-to-part are honest. For the really difficult bits, I've done my best to match the video take to the audio take in the final cut, but I've also chosen a lot of what I thought were the best angles, too. If you spot a place where what you're seeing doesn't exactly match what you're hearing, you'll just have to deal with the disappointment, as I can't be arsed to open this premiere session back up!

Anyway, in the spirit of the Nutri-Matic Drink Synthesizer, "share and enjoy". :)

The songs these excerpts come from can be found on either the Twenty Twelve or Sucker Punch albums, available at www.cdbaby.com/artist/hajiskitchen