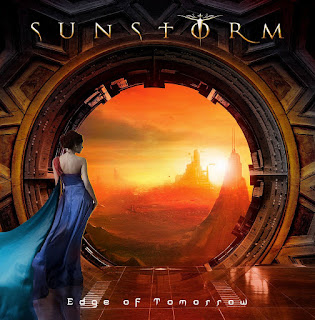 Simone Mularoni
finally! this one kept me & Alessandro Del Vecchio busy for many months but I'm sure everyone will like the album! Played all rythm & lead guitars and wrote 5 songs. I realy cannot express how much I enjoyed playing along with these amazing musicians and especially together with one of my favourite singers ever! It's a dream came true after growing up listening to Rainbow's, Malmsteen's & Deep Purple's album with Joe Lynn Turner Official Page on vocals....

BREAKING NEWS: Frontiers Music Srl is pleased to announce the release of SUNSTORM’s fourth album entitled “ on May 13th, 2016.

SUNSTORM is Joe Lynn Turner Official Page's succesful AOR / Melodic Rock project, something that came about for the first time in 2006 when Frontiers President Serafino Perugino wanted to dig up some unreleased gems that JLT wrote during the late 80’s and early 90’s.

The very good reviews and acclaim which surrounded the debut self-titled release was the fuel that ignited three more records, until the project was momentarily shelved when Joe started working on the Rated X supergroup with Tony Franklin and Carmine Appice.


After the release of the RATED X album, Joe wanted to go back to the more melodic material of SUNSTORM, but also wanted to retain some of the harder edge which the RATED X album had. So he asked producer and songwriter Alessandro Del Vecchio (Hardline, Edge of Forever) to come up with some new songs in that vein. Del Vecchio joined forces with Simone Mularoni, guitar player of Italian prog metallers DGM. Together they developed songs which were exactly what Joe wanted, so it was a natural process to move forward and record another SUNSTORM album. As usual, other songwriters, such as Soren Kronqvist and Daniel Palmqvist completed the array of individuals involved.

Joe Lynn Turner says: “This new Sunstorm album is the best of the series! We went harder... stronger... and heavier than ever before without losing the integrity of what the project is about...I call it Melodic Metal! The songs are very well crafted, the messages are profound, the performances amazing..and the sound is incredible! All involved can be very proud of such a great music. I urge anyone who loves great music to check out "Edge of Tomorrow", you won't be disappointed!”

The resulting album shows a slightly new direction for SUNSTORM, which still features organic and very strong melodies as a trademark. Enjoy!

“Edge of Tomorrow” includes the following songs: Don’t Walk Away From A Goodbye; Edge Of Tomorrow; Nothing Left To Say; Heart Of The Storm; The Sound Of Goodbye; The Darkness Of This Dawn; You Hold Me Down; Angel Eyes; Everything You’ve Got; Tangled In Blue; Burning Fire.