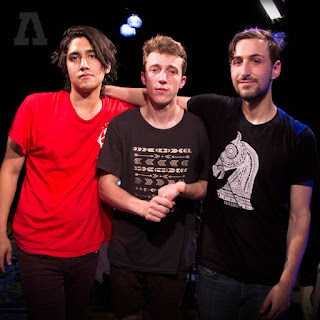 
about
Vasudeva is a playful instrumental band who deploy an array of delay, reverb, and echo to define their complex textures. The reticent three-piece formed a lasting relationship in early childhood and have been friends and musical confidants ever since. This personal relationship is an integral part of Vasudeva’s clean, effortlessly dynamic sound. Corey Mastrangelo and Grant Mayer’s dual guitars bounce off each other playfully tapping and strumming harmonious lead parts. Derek Broomhead’s quick hands deliver beats fit for a club; constantly pulsing as conductor of the trio’s chaotic arrangements. His stable undertone creates a firm backdrop for the band’s slickly grooving guitar banter.

The 2013 release “Life in Cycles” is like a soundtrack made for stargazing. Sonically, it’s not far from a ‘sounds of nature’ disc; crafted with a delicate ambiance that borders on the spiritual. Mixed and produced by good friend and Gates frontman, Kevin Dye, and mastered by the great Greg Dunn, “Life in Cycles” has the personal touch necessary to Vasudeva’s sound. It’s a powerful debut, showing growth in songwriting and technical skill that promises a bright future for the young progressive trio. Check them out performing tracks old and new here on Audiotree Live.