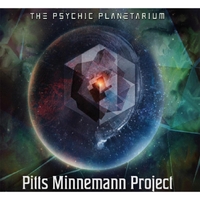 We commend your impeccable musical taste and wanted to let you know that Pitts Minnemann Project has a brand new release out now. It just went live on our website for sale. And we just had to let you know FIRST since you're one of the few hip and wise people who "knew them way back when."

It is called The Psychic Planetarium.


Pitts Minnemann Project came into existence when keyboardist Jimmy Pitts (The Fractured Dimension, Scholomance, Spastic Ink) contacted German drumming phenomenon Marco Minnemann (Steven Wilson, The Aristocrats, Joe Satriani) to inquire about the groundbreaking Normalizer 2 series - in which several progressive musicians were invited to compose original music to compliment the same 51 minute drum solo. Being a fan of not only Marco, but the other artists who presented their own versions of Normalizer 2, such as Alex Machacek, Mike Keneally, Trey Gunn, and Jason Sadites, Jimmy asked and received Marco's blessing to create what would become 2 L 8 2 B Normal. Unleashed in 2012, featuring Pitts' primary collaborators Fountainhead on fretless and fretted guitars and Jerry Twyford on bass, and augmented by a host of guest soloists including Ray Riendeau, Jeremy Barnes, Joe Deninzon, amongst others, 2 L 8 2 B Normal was well-received by critics and fans alike, even garnering the accolade of Album of the Year from India's Metal Wani 'zine. The success of the first record made the decision to record a follow-up album an easy one. This time based upon multiple drum solo performances by Marco, the second album by Pitts Minnemann Project is now presented by a more focused, four piece ensemble of Jimmy Pitts, Marco Minnemann, Fountainhead (ex Obscura), and Jerry Twyford. This new creation presents an even more intense instrumental tour-de-force sure to please fans of progressive rock and metal, as well as lovers of jazz fusion and the avant garde. The Psychic Planetarium is an album where one can be whisked from 70's inspired fusion passages, to blast beats, to reggae, all wrapped up in an album which is progressive in substance above merely style.

To purchase this music now or to hear some sound samples first, click here: http://cdbaby.com/cd/pittsminnemannproject2

Hope you enjoy it, and thanks for supporting independent music!