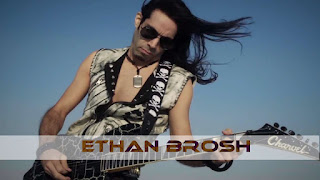 The official music video for Escape Route with its intro titled Revival is the first tune on the brand new 2018 Ethan Brosh record Conspiracy. The artwork for The single Escape Route was created by the legendary Derek Riggs (Iron Maiden) as well as the album cover for Conspiracy.

We have Vinyl, CD's, Digital Downloads and much more at

This video was made by Enver Perez of IEP media.

The brand new studio album CONSPIRACY by Ethan Brosh is Ethan's 3rd solo record. This record features 14 new tracks that are in the style of Hard Rock Guitar Instrumentals. A sub genre of rock/metal. Though this is the style label we put on it this record has enormous variety of moods, styles and influences. This album just screams melodies in great portions. The virtuoso playing that is expected in this style of music is more than present in this recording although mixed with lots of different musical and compositional ideas, Thus creating a much more listenable balance to keep the attention and interest level at a high point.

CONSPIRACY features the world class players in The Ethan Brosh Band. In addition a solo from Steel Panther's Satchel is featured on the tune Tomb Of The Gods as an exclusive on the album version (Not the music video). No expense was spared while making this record. Not only top notch musicians played on this record, Also the production elements of this record were taken care of by some of the industry's all time best. The idea here was not to create the fastest least expensive product, The idea was to achieve the highest quality sounding and looking record possible. This was a 3 year process of countless hours of work by lots of different talented people. In short we believe there is something for everyone on this album and you simply won't be dissapointed for getting it. If you'd like to support Ethan and what he does in the music world this is the way to do it.

because our world is all about tagging we will say this, Get a metal guitar lesson from Ethan Brosh who's the brother of a female guitar player for learning some of the best guitar solos. Do you like players like Nuno and Guthrie Govan? have ideas for more good tags for us? gotta love 2018!