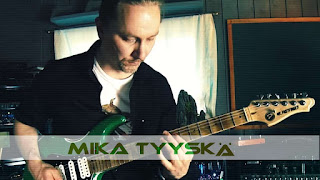 Epic Guitar Playthrough taken from the special package "Exploding Guitar Extravaganza" . Bit more heavier and progressive, how do like it? Please consider buying the package. Get plenty of inspiration and entertainment (while supporting my work) https://sellfy.com/p/oPRY/

This tune has a little more edge than Wax on - wax off. Some tight rhythm guitar parts that were a bit tricky at first when I came up with them. Still remember tha I really had to sit down to explore what are the best (easiest and still great sounding) ways to finger and pick these. The main theme / verse chord were the first thing that started the whole thing. I liked those chords but it took some time before I woke up one morning and hear them combined to the Led Zeppelin inspired rhythm (took me a while before I realized it's similar to what goes on on "Some Remains the Same").
Basic minor pentatonic stuff is mixed with more interesting and exotic scales. During the verse I used Japanese pentatonic Hirajoshi scale, I could have used harmonic minor scale also, but that wouldn’t sounded like Mr. Fastfinger don’t you think. B part however uses Phrygian dominant (mode from the harmoinic minor scale).

About the transcription tab vs the solo in the video.
The ending of the outro solo here was improvised. On the package you will find the original lines transcribed. Otherwise my playing and notes in this play through should be very closely the same!

The special clean tone
If you’re wondering about the more clean guitar tones in this tune. Well, to mimic the tone on the album I actually split my guitar signal to two. The other part of the signal went as normal to my Hughes & Kettner amp but as I wanted to have extra sparkling I lead the other signal direct to the recording interface (actually via my ampeg amplifier to do some eq first). During the clean parts this direct tone is mixed in a little bit.

3 MISSING ALBUM TRACKS (mp3 + wav audio): Rescue You (unreleased tune), Crying in the Rain (previously released on Senseitional Treasure Tape collection), Once There was a Tree II (unreleased short cue from the album).

3 MIKA'S WILD BEDROOM DEMO RECORDINGS FROM 1996 - 1997: Anthem (Exploding Solo/Guitar Shred Show anthem melody), One Year Vacation, Incredible Pocahontas (early version of Go Flash Go). These tracks might be shocking but most probably also entertaining! Gathering all the files, shooting all the playthroughs and all for this package was a real adventure.

Hope you enjoy this Extravaganza -package and get some ideas to your own playing, inspiration to create your own music and some real good entertainment!
Epic - guitar playthrough. Melodic instrumental rock metal. Hirajoshi scale. Exploding Guitar