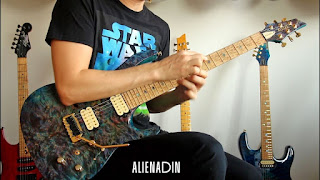 #Kiesel Guitars #DC600
This is a legendary piece by the genius Italian violinist Niccolo Paganini.
Steve Vai's Eugene's Trick Bag was heavily inspired by his Caprice No.5, and after I had done a tapping arrangement of that piece, I thought it would be very interesting and challenging to arrange this one for tapping as well. I have been arranging and re-arranging this piece for about 3 years now, and it's been a trying journey at times. This is foremost meant to be seen as an exercise, and it's not even arranged to be of optimal convenience. Some parts are more whimsy than necessity, and played that way simply because they look cool or are particularly difficult. Despite all that, I have attempted to play it musically and infuse it with soul as well. Ideally, a variety of techniques should be used to best express its wonder, but that was not the point of my endeavour. I can honestly say that I have never practised anything as much as this one. It's not perfect yet, and I could keep practising it until the end of days, which I probably will anyway, but I think it's time to let go, and release it to the public. I hope you enjoy it. If you do, please give it a like, leave a comment, share it wide and far, and subscribe to my channel for more. Thank you, and May The Force Be With You.

I recorded this piece with my piezo equipped Kiesel DC600, with the magnetic pickup feed going through the T.C.electronic G-System-- Insert Loop-- Engl Screamer--G-System effects chain, then into the power amp section of the Engl, out through the TAD Silencer to Focusrite into Cubase.
I also recorded a mic'ed feed, and an amp out track as well, but only ended up using the TAD track.
The piezo went into my T.C. Helicon Voicelive 2, and via optical cable into my Focusrite--Cubase. There, I mixed and leveled the two signals and made a downmix, which I used to sync up with the video in my video editing software. Then I muted the video audio feed, as it's very noisy and rough, as can be heard in the second version of the video, and slightly (-10db) at the beginning. Finally, I made a 1080p video of it, and uploaded it onto youtube. And this is the condensed version, of course.