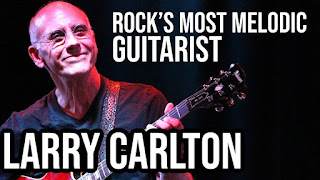 Larry Carlton is an American guitarist who built his career as a studio musician in the 1970s and '80s for acts such as Steely Dan and Joni Mitchell. He has participated in thousands of recording sessions, recorded on hundreds of albums in many genres, for television and movies, and on more than 100 gold records. Larry delivered his self-titled debut for Warner Bros. in 1978, shortly after he was recognized for his ground-breaking guitar playing on Steely Dan’s Royal Scam album. (Carlton contributed the memorable guitar solo on "Kid Charlemagne.”) He released four more albums for Warner Bros., Strikes Twice (1980), Sleepwalk (1981), Eight Times Up (1982), and the Grammy-nominated Friends (1983).

He continued studio session work and touring in between, emerging again in 1986 on MCA Records with an all-acoustic album, Discovery, which contained an instrumental remake of Michael McDonald’s hit, "Minute by Minute." The single won a Grammy Award for Best Pop Instrumental Performance in 1987. Carlton’s live album, Last Nite, released in 1987, got him a Grammy nomination for Best Jazz Instrumental Performance.