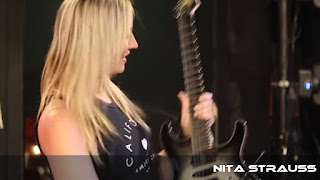 With a new Ibanez signature model and an ultraportable plug-and-play rig, the rock heroine travels light to create the heavy tones on her new solo debut, Controlled Chaos.

Furious, focused, and expansive, the playing of Nita Strauss is the stuff emerging-rock-guitar legends are made of. During soundcheck at Nashville’s Basement East, PG’s John Bohlinger checked in with Strauss, who was on a break from her regular gig with Alice Cooper, touring in support of her debut solo album, Controlled Chaos. Strauss wrote, produced, engineered, and recorded all the guitar and bass parts on the album, which, in testament to her abilities and her fan base, was made via a Kickstarter campaign that exceeded its $20,000 goal by $145,755. As she rips for our cameras, Strauss, the first woman to have an Ibanez signature model—which debuted at Winter NAMM 2018—talks about her JIVA10 and her backup S6570Q, and puts her easy-traveling rig, a Boss GT-100, though her core settings. Check out how Strauss shows off the JIVA10’s radical tuning stability at the 15-minute mark! And yes, she is a descendent of the Austrian composer Johann Strauss.