For those living in the Bay Area this is a 'not to be missed' event, with a great line up of 5 bands that will play. Among others the Danny Jones Band will play with Whitesnake bass player URIAH DUFFY in the line up ! This event is organized by a great group of very dedicated people, that want to contribute to Jason's cause. 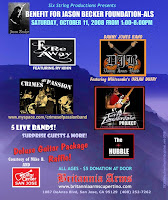 As a little preview of Jason's new CD, have a look at the CD Cover………

Finally, check out the Memorabilia Auction for Jason on eBay. It features some great stuff from Paul Gilbert ! http://shop.ebay.com/merchant/coolenron. You will find some great deals on offer... as long as you don't out bid me ;o)... Only joking, help Jason by bidding as much as you can for each signed item!