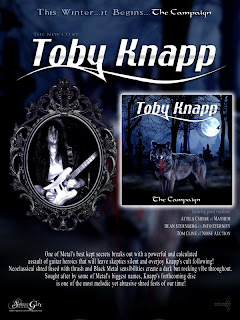 The CD has been announced. entitled the campaign... from Shredguy records... expect some shred!

Toby Shreds ! .... Ive always been a fan of his stellar technique
and he has one of the best vibratos in the shred genre ..... Shred on ! Rob

I agree rob. whats funny is when varney was on the brink of having me follow up GUITAR DISTORTION , i liked his rhythm technique, but had no idea he had "A VOICE"! and a flawless one at that. until the last couple years hearing his full range music and soloing capability. so...CHEERS TOBY, you deserve some serious reck on this one!