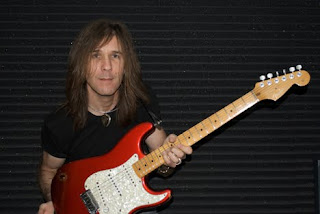 In the beginning there was nothing... And then there was light! The Dawn Of Time. Fifteen billion years later George Bellas presents to you an epic collection of instrumental songs inspired by the universe, how it was created, and from where and what it came from.

'The Dawn Of Time' is an instrumental album rich in Romanticism and Futurism with over-the-top performances by Marco Minnemann and George Bellas. The album contains a diverse collection of 19 songs that range from simple and delicate, to complex and ferocious. The production is dynamic, clean, and has an open sound to it allowing the music to breath naturally.

Bellas comments, “For this album I wanted the arrangements to be short and accessible, and the songs to be euphonious and tonal, especially when compared to my previous album, which was a single 75 min song and atonal for the most part. For some songs I wanted to utilize compositional techniques and elements from the baroque, classical and romantic eras, and also have other songs lean more on the progressive side by using modern aspects of music. Another important factor to me was the melodies, I wrote some in a lyrical style, and others in a virtuoso instrumental style. I strived for a pleasing balance of the two”.

'The Dawn Of Time' was inspired by the universe, how it was created, and from where and what it came from. Bellas states, “I have always loved science, especially astrophysics, and this album is a creative expression of the visions produced from studying the works of great scientists such as: Albert Einstein, Carl Sagan, Michio Kaku, Amy Mainzer, and Brian Green, to name but a few. Their research, thought-provoking lectures and writings have been the most inspiring resources I have ever had. This album is different from my last two releases which were ultra modern in style, and "The Dawn Of Time" consists more of a neoclassical sound, along with some futurism sprinkled throughout. This new album is also more aggressive sounding than my previous release. The production on "The Dawn Of Time" is very open with lots of dynamic headroom. I do not subscribe to the volume wars that the industry has been in since the advent of the compact disc. When I want to hear something loud I much prefer to use this neat little invention called a volume knob. So, if this album seems quieter than other albums you're used to - TURN IT UP!”

Marco Minnemann once again performed and recorded some mind blowing drum takes. Bellas – “Working with Marco is always an extreme pleasure. I truly believe Marco to be one of the best drummers that has ever lived. I compose and score all the parts for all instruments in my music, but when I hear Marco's interpretation and the additional Minnemann pizazz he adds, it just blows me away and really takes the parts to a whole new level. And believe me, just playing the complex rhythms I throw at Marco can be daunting, but for him to play them with the intensity and personality that he does is just sheer over-the-top talent”.

The voracious writing process began shortly after Bellas’ previous release "Step Into The Future" was turned in to the record label. Bellas comments, “As I usually do, I first scored out all the parts, and then proceeded to track the guitar, bass, drums and keys. The guitar was recorded through a Focusrite Red Series mic preamp into an Apogee Rosetta 800 converter, and then optically straight into a DAW through an RME PCI card".

"The bass guitar sound on this album was recorded differently from my previous releases. For this album I used a Musicman Stingray bass plugged into an Ampeg SVT Classic amp and cabinet. I used a Sennheiser MD421 to mic the bass cabinet and combined that with the direct out of the amp. Another factor of achieving the bass tone was using a custom made isolation box for the mic, not an iso-box for the whole cabinet, but just the mic. Having the isolation box surround the mic allowed me to selectively increase or decrease the amount of room reflections. For guitars and amps I used the usual assortment of Fender Strats, Gibson Les Pauls, a Marshall 1976 MKII, a Marshall JCM800, and a few JCM900 Marshall amps. For the majority of the album no compression was used, and in the few spots that it was used it was a minimal amount”.

George Bellas - One of the worlds leading and most prolific guitar virtuoso’s returns with ‘The Dawn Of Time’, an album which encompasses all the numerous elements heard throughout his solo career to date on July 16th 2010.


George Bellas - "The Dawn Of Time" 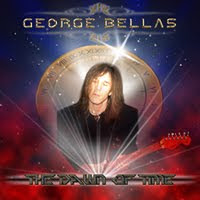