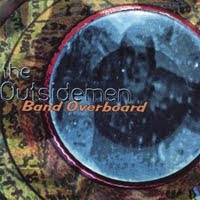 This is a great fusion CD:

The Outsidemen was a project started by Ralph Humphrey, Jim Lacefield, and Mike Miller. Originally it was for an improvisational class at what is now known as M. I., (Musician's institute) in Hollywood, Ca. We used to meet before class at the mexican restaurant across from the school, and we would bring in our sketches, sometimes a whole piece, sometimes fragments, and come up with a rough form, sometimes REALLY rough. Then we would spring them on ourselves and the poor student/guinea pigs in the class, to simulate going into a recording session and being handed a new piece of music you had never seen before.

Then we had to make something of it. So the pieces were developed on the spot, with a lot of improv and wild stabs at things, which would often workout very well. Not always so well, but sometimes you learn a lot more from your mistakes than from your successes.

At one point, M. I. was going to start their own label, and we were one of the first projects. they rented the Record Plant mobile truck, and we recorded a concert at the school. The school, at some point, abandoned the label idea, and handed us the tapes. Jim Lacefield and myself immediately put up the money to have it pressed, and with the help of Christine Thomas, "Band Overboard" became a reality.

With the untimely passing of Jim Lacefield a short time later, I composed one more piece, especially dedicated to Jim, "A Moments Rest", and "Band Overboard" was completed. We really hope you enjoy this snapshot of a unique time in all of our lives.
http://www.abstractlogix.com/xcart/product.php?productid=24671
Mike Miller