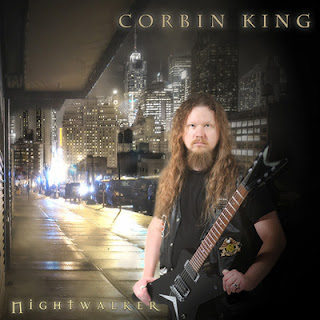 Corbin King guitarist for VAINGLORY/KINRICK, has just released his Nightwalker album on Diginet Music. This all instrumental release showcases Corbin's prowess. Producer David T. Chastain states: "Corbin has the technique to match JOHN PETRUCCI, PAUL GILBERT and the like plus the heavy blues rock sensibility of STEVIE RAY VAUGHN. This combination creates a style that is impressive but at the same time has quite the emotional aura. He is not a mindless shredder."