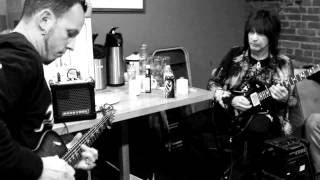 Join us for the next episode as the bus rolls into the infamous Bottom Lounge in Chicago, IL!

Watch the band set up as they get ready to close out the Midwest leg of their fall tour at the intimate Bottom Lounge in Chicago! You are going to have to mind the volume however, as the combination of the concert, the howl of Chicago's Green Line El passing overhead, and the cheers of the massive Chicago crowds will surely do a number on your hearing.

As the night progresses after sound check, watch Mark Tremonti head into his dressing room backstage with shredding esquire Michael Angelo Batio for a free guitar masterclass. MAB even grabs hold of one of Mark's PRS guitars to shred on as the two go through some massive speed picking exercises. Watching two guitar leviathans playing through a pair of small (but mighty) sounding Roland Micro Cube amps is quite the sight as well!

Then grab a spot in the pit as FRET12 brings you some great live footage of crowd favorite "Decay". There may even be a small surprise in the video that is indeed quite "beautiful"

Make sure to stay tuned as the bus rolls out of Chicago and back to the east coast for a stop at Club INT in Connecticut!