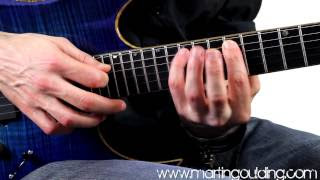 For the September 2012 edition of Guitar World magazine which features Steve Vai and Tosin Abasi on the front cover, I put together my back cover column "Last Licks" based around the Sweeping technique and in the style of some of the great neo-classical players of the mid to late 1980's such as Yngwie Malmsteen, Vinnie Moore, Marty Friedman, Jason Becker, and Tony Macalpine, with the ideas finished authentically with the stylistically appropriate tone-wide vibrato style. This technique is fast and fluid, adding a rich melodic element to solos in contrast to the more scalar based lines. To keep the technique clean, each note must be played finger-on/finger-off or as a roll with good separation as opposed to holding down chord shapes. Set the fretting hand first finger flat, muting the string above and all beneath the one being played, and as you ascend through the strings in one single sweeping motion, move the thumb pad over the lower strings to stop unwanted noise.

For the audio I used an Axe FX II set up with a Marshall Brit 800 Mod type sound (boost set off) with TS808 tubescreamer overdrive with the drive set to half and some medium room reverb (stereo delay from logic on mixdown) and pseudo double tracking (doubling the track and delaying one side/panned hard left and right), straight to an Apogee ensemble card into a Mac Pro running Logic. For Video, a Canon 60D and FCP X for editing. Guitar wise, i used my Ibanez J Custom JCRG-2 TB with EMG pick-ups. (see gear page). The supporting video goes into some detail breaking down the examples in a way that will be accessible for intermediate level players.

To hear these techniques in context, check out some of the solos i've put together in the style of the greats.
http://martingoulding.com/lessons/solo-studies/