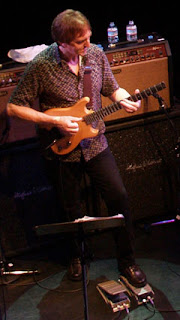 What yardstick do you use to determine when a piece is ready to go?
When it feels complete. I have a lot of ideas where something is there, but I know it’s nowhere near completed. So, I keep working on it until it makes a complete circle. It’s like putting two ends together. I keep working on a tune harmonically until I feel there’s a resolution. I also like to modulate things, so even though it sounds like I’m playing the same thing twice, it’s being played in a different key. You hear that on the tune “Tullio” on Hard Hat Area. I think it’s the longest chord sequence I’ve done. The whole solo section for keyboards and guitar is the same. It sounds like it’s almost repeating, but if you listen, you realize the keyboard solo happens just one time. It’s an example of how I let something complete itself in that I keep playing until I feel the piece makes a whole circle.

When it comes to feedback on your music, whose opinions do you value most?
The guys that I work with, because they’re the closest people to the situation. I always ask them “Does this sound a little bit silly?” They’ll usually give me an honest opinion.
I caught you live several times in 2007 and the audience loved what you were doing, but at some point during every show, you stopped and apologized to the crowd for your playing.

What do you make of the gulf between their perceptions and your own assessment of your performances?
I’m really flattered that people enjoy the music. Most of the time the audiences are great people and really encouraging, but that has no effect on me as to what I perceive happening myself. That’s the only thing I can go by. The difference between a good and bad night is that I probably wouldn’t apologize. That happens maybe once a year. It’s very rare. [laughs]