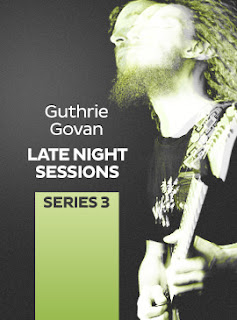 The daylight has faded and the King of the Late Night improvisation yet again dons his crown...
...plugs in his guitar and commands "Roll the track Fellas!" to bring you his Late Night Sessions 3 jam track series. 5 new absolutely stunning live performances captured on film for you to stare at in a state of amazement and then smile in the knowledge that we will show you how he actually did it through the 'Power of JTC 100% accurate TAB!'
Just when you thought you had managed to conquer the colossal amount of Guthrie licks that we have already transcribed for you, the master of the jam creates another fresh barrel full of them in this totally awesome new package. Mr Govan is on top form again (when is he not?) and has played in a truly sublime fashion over these 5 wonderful tracks written and recorded by no other than the immensely talented Martin Miller.
The JTC team still can't truly believe what happened in front of our eyes at this filming. This man is a monster when it comes to on-the-spot improvisation.
The Late Night Sessions 3 comes with 5 solo tracks by Guthrie, solo backing tracks, extended jam tracks, live video performances and completely accurate TAB and notation.
What a way to end 2012! http://www.jamtrackcentral.com/jamtracks/the-late-night-sessions-series-3