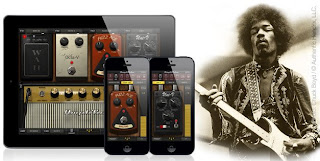 The AmpliTube Jimi Hendrix™ mobile Apps offer models of Hendrix's actual amps, cabinets and effects, so that anyone can reproduce his tone or tweak it and make it their own. The presets are arranged in discography format, making it easy to dial up the right gear and settings to replicate the guitar sound from virtually any song in his catalogue. Use IK's iRig or iRig STOMP interfaces to get the best spot-on emulations of the Hendrix gear.

The Apps provide two historically accurate amp models: JH Gold (based on Marshall® JTM 45™), "the" amp that Hendrix used almost exclusively from 1968 on, and JH Dual (based on a Fender™ Dual Showman), each with a matching cabinet.

Five effects are included: Uni-V (based on Univox™ Uni-Vibe), Octa-V (based on the Roger Mayer™ Octavia), Fuzz Age (based on the Arbiter® Fuzz Face®), Noise Filter (from AmpliTube), and Wah 46 (based on the Vox™ V846 wah, and free after registration).

In the powerful Song Player window, users can directly purchase Hendrix songs such as "Hey Joe," "Fire," "Red House" and many others to play along with. The Song player can also load songs from the user library, or via Wi-Fi and File Sharing; and it provides a Speed Trainer and a vocal-eliminator.

The Apps are equipped with a single-track recorder that can be expanded to 4 or 8 track self-contained studios with mixers and master effects, for the iPhone and iPad Apps respectively.

AmpliTube Jimi Hendrix™ for iPhone/iPod touch or iPad are available on the App StoreSM for $14.99 / €13.99. Owners of AmpliTube can obtain the Hendrix models through In-App Purchase after updating to the latest version.