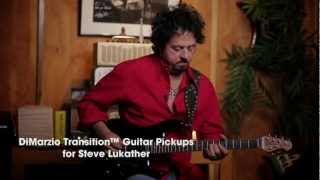 to welcome legendary TOTO guitarist, solo artist, and first-call session player extraordinaire, Steve Lukather to its team of esteemed endorsers. DiMarzio announced it will release two new Transition™ humbucking pickups for electric guitars in early December of 2012. The Transition™ pickups were developed by DiMarzio and Lukather for his new LIII™ Music Man® guitar. The pickups will also be available for retail sale from DiMarzio.

The pickups are named after Steve Lukather’s new album, Transition, that will be released on January 21, 2013 by Mascot Records. Lukather played the LIII™ guitar with Transition™ pickups throughout the new record.

The passive Transition™ humbuckers are both subtle and tough. They have power and depth. Steve says they’re organic, and they allow him to own his sound. “These days I like it simple and direct,” he says.

The Transition™ Neck Model (DP254) has very good balance between solid bass and glassy treble. The spread between lows and highs creates a big sound that works well for both solos and backup, while the frequency response of the coils is tuned just far enough apart to open up the mids without sounding hollow.

A powerful magnet and coils tuned to slightly different frequencies create very strong fundamental tones, with sustained notes that resolve easily to first- and second-order harmonics. The output rating is not as high as DiMarzio’s loudest models, but the Transition™ Bridge Model (DP255) puts a lot of impact into every picked note.

DiMarzio’s new Transition™ Neck and Bridge Model pickups are made in the U.S.A., and are available for order now. Suggested List Price for each pickup is $115. DiMarzio plans to show the pickups at the January 2013 NAMM Expo in Anaheim. For more information about Transition™ pickups, visit our website at www.dimarzio.com.