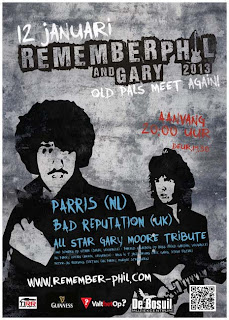 Remember Phil & Gary is the name of the tribute concert for Phil Lynott and Gary Moore on January 12 in The Bosuil in Weert. The rock event is the sequel to Remember Phil Lynott tribute to the successful start of the year in Weert. During the second edition on January 12, 2012 Gary Moore is also commemorated. The master guitarist played with Thin Lizzy, before he went solo. He died on February 6, 2011. The performing bands are Parris from the Netherlands, Bad Reputation from the United Kingdom and an All Star Gary Moore Tribute, consisting of musicians from different bands: guitarist Timo Somers (Delain, Vengeance), bassist Barend Courbois (Blind Guardian, Vengeance), singer Ian Perry (AREON, Vengeance), drummer Hans in 't Zand (including Parris and Harris) and keyboardist Peter-Jan Kleevens (TGroove, Purple Strangers). The tribute is due to Vibe for Philo, the annual music event in Dublin in memory of the too early deceased Phil Lynott. This musical memorial celebration always takes place on 4 January, the anniversary of the singer / bassist of Thin Lizzy. Thousands of fans from around the world, including the Netherlands, annually visit 'The Vibe'. That day occurred numerous Thin Lizzy cover bands. Music Lover Roger Rutten had the idea for a similar evening at De Bosuil organizing. Thin Lizzy fan Peter Vleeshouwers joined him. Together they put the first edition on legs. The tribute debut in a full Tawny Owl on January 7, was a resounding success. Dagblad de Limburger praised the achievements of particular Parris, regional Thin Lizzy cover band that played several times at the Vibe for Philo. Vleeshouwers Peter: "The visitors were very enthusiastic and asked a second tribute concert. Here we would like to respond. We choose a slightly different approach, because Gary Moore deserves a tribute. " Remember Phil & Gary is sponsored by: more