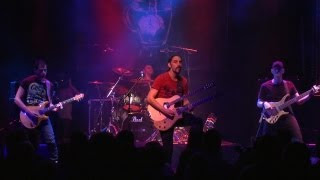 Yossi is known for being the constant explorer of sound and musical boundaries, driving inspiration from different cultures around the world. Yossi plays 17(!) different types of guitars and traditional instruments, and has been invited to play live and share the stage with artists such as Metallica, Marty Friedman, Steven Wilson, Yehuda Poliker and many others.

Yossi Sassi is a first level endorsing artist of some of the best musical equipment manufacturers in the world, including PRS Guitars, Engl Amps, Elixir Strings and Electro-Harmonix.

Yossi Sassi has cooperated and recorded with artists from Kuwait to Portugal. He is a veteran performing artist, with hundreds of global shows and major festivals in his record. In 2010 alone, he performed ~100 shows in 30 countries, including U.S. and European tours, shows openings for Metallica, shows filmed for DVD (with Porcupine Tree's Steven Wilson) and more.

Yossi Sassi's career with "Orphaned Land"
Every day, in every news program on this planet, the Middle-East conflict is a major topic and one of the reasons that the world we all live in is a world apart. Where politicians have failed, a mere musician daringly achieved with his group "Orphaned Land", the unthinkable and united Israeli and Arabian people despite any cultural, religious or political differences and conflicts!

"Orphaned Land" is probably the only band from Israel to ever build up a huge following among Muslims and Arabian people, as they communicate freely via the band's social networking pages.

Founded in 1991, "Orphaned Land" are the pioneers of a genre that grouped many followers. After their debut release "The Beloved's Cry" (1992), the band was signed at Holy Records and released the magical and highly-praised "Sahara" (1994) and "El Norra Alila" (1996) albums. Later on the band signed with Century Media USA and came back with an epic release, entitled "Mabool" (2004), soaring to over 250,000 copies in sales.

The band's 2010 release, entitled "The Never Ending Way Of ORwarriOR", got recommended by Kirk Hammett of METALLICA in "Metal Hammer" magazine.

Featuring world-known musicians such as Marty Friedman (Ex-Megadeth, 27 gold and platinum records, 5 Grammy nominations), this album takes you to a journey around the world with traditional instruments such as Saz, Bouzouki, Oud, Chumbush and many more!

The result is easily one of the most diverse and atmospheric debut albums the music world has ever seen, heard and felt.