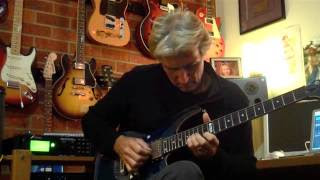 Keyboard player Alessandro Bertoni, grew up in Treviso, Italy,started out with the obligatory childhood classical piano lessons at the Conservatory. Later, he approached to jazz and contemporary music language ,attending course and workshops in Milan and Padua and from then on he went into this musical direction. He continued those studies until he moved to Los Angeles to attend the Keyboard Program at the Musicians Institute in Hollywood and got in contact with the finest LA musical scene and had lessons with top-class teachers and performers.

As composer and band-founder he released his full length debut album “Aphelion - Franticode - “ mixed by in Los Angeles by the keyboard-famous Derek Sherinian. "Franticode" gained valuable popularity as a world acclaimed release due to its on-your-face and intense instrumental technicality, well-blended with jazz/fusion oriented sense of phrase.

Alessandro’s inspired by all the music he wish he wrote and played ,his playing and tastes encompass fusion, funk, nu-jazz, progressive and he’s ceaselessly practicing and composing in various media and styles. His formula for music is definitely played by those who display their prowess with long ascending soulful and tasteful grooves designed to keep a body and a mind in motion.

He’s currently working on a number of projects within the jazz/fusion realm both as composer and performer and collaborating with a variety of world class player with the likes of bassist and vocalist Chris Buck, drummer Sam "The Bull" Aliano, canadian bassist Rod Chappel (Lightspeed), and many others from different musical background all over the world.

A brand new nu-funk/groovy/experimental project called "Sycamore Lab" is now in the pipeline in collaboration with top-class guitarist/composer/producer Marino De Angeli and a variety of guest appearances.