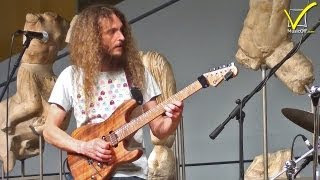 Hello musicoffili and youtubers, today we have the pleasure to present you a great special composed of three video interviews with a super band composed of musicians truly exceptional, the Aristocrats of Guthrie Govan, Marco Minnemann and Bryan Beller. We met in Rome at Centrale Montemartini, an extraordinary museum housed in a building of modern industrial archeology. Among old machinery for the production of electricity and precious remains of ancient Roman times, the Aristocrats have performed a wild live divided in two separate sessions, which marked one of the most interesting appointment of the event Guitar Legends Festival.

As usually, thanks to the tour manager Riccardo Cappelli for his precious cooperation.