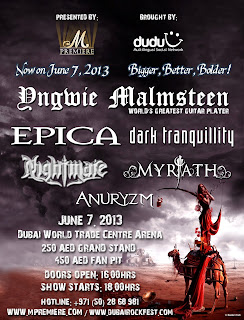 Rock music is the biggest and most wanted genre with the largest numbers of followers around the globe and it creates an invisible bond when musical acts from different countries and cultures get united to play in one place sharing the same stage. Dubai World Trade Centre Arena boasting 14 meter high ceilings, over 9,000 square meters of covered exhibition space, the Arena is the perfect spot to host the Dubai Rock Fest 2013 for over 8,000 guests in an acoustically designed, fully enclosed, all weather environment. Only on June 7 and only for one day you will witness and experience impressively diverse lineup of world Rock Stars which will include:

June 7, 2013 will be the start and a new beginning of a new chapter in Dubai's Rock Life.