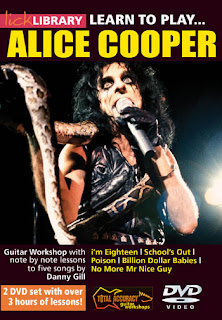 LickLibrary are delighted to bring guitarists everywhere Learn To Play Alice Cooper. The band has been part of rock and roll history for almost five decades and the guitar lessons on this double DVD include some of the most well known and loved tracks from these years.

During much of that time, the formidable guitar team of Dick Wagner and Steve Hunter sustained the Alice Cooper band’s creativity. Dick Wagner’s songs and bitingly melodic style of lead guitar have featured on more than 200 renowned and award winning albums. If you read the small print you will find there is a lot of Steve Hunter in your CD collection too. He has played with Lou Reed’s, Peter Gabriel, Tracy Chapman, David Lee Roth and many more.

Learn To Play Alice Cooper (RRP £24.99) has Danny Gill giving note for note guitar lessons for five Alice Cooper tracks, starting with the bands breakthrough hit I’m Eighteen which appeared in Guitar magazine as one of the 50 heaviest riffs of all time. Next comes the iconic anthem Schools Out full of classic riffs and Poison with its clever harmonies, ingenious chord progressions and key changes. Danny also explains every detail of Billion Dollar Babies and No More Mr Nice Guy, both full of interesting sections and smart twists that add to the songs intensity.

There is something for all levels of guitar players on this double DVD set, beginners can easily nail the chords of I’m Eighteen, whilst the more experienced can get their teeth into the intricacies of the solos. Danny walks you through all this and shows how it can all fit together whens he plays it against a full backing track.

To learn more about musically complex shock rock go to www.LickLibrary.com where you will find a vast selection of online guitar lessons and other guitar tuition DVDs as well as the Learn To Play Alice Cooper Perfect Partner set, which is the double DVD set plus Jamtrax CD.