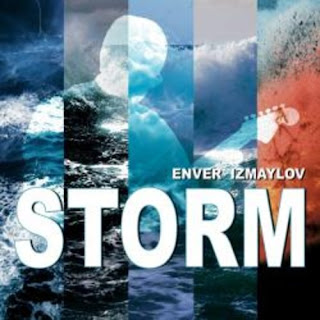 Enver Izmaylov - Worldly colors - by Anil Prasad
The electric guitar has no boundaries for Enver Izmaylov. The virtuoso musician of Crimean Tatar heritage, a Turkic ethnic group residing in Crimea, located on the northern coast of the Black Sea, is a legendary performer in Ukraine and Russia. He's renowned for using his dazzling tapping technique to bridge jazz, pop and classical influences with Crimean Tatar, Balkan and Turkish folk music.
Izmaylov has a deep discography focusing on solo guitar recordings, and intimate duo and trio efforts featuring players including flautist/saxophonist Geoff Warren and percussion master Burhan Ocal. His latest release, River of Time, is an ambitious, bigger production that combines his guitar approach and multi-genre focus with a world of effusive, percolating rhythms, and even a healthy dose of driving rock.

Tell me about the concept behind River of Time.

It represents my desire to showcase the capabilities of the guitar as something that can reflect the music of different nations. My interest in uniting Eastern, Asian and Western sounds is inspired by my love for the cuisines of these regions. The album focuses on modern jazz-rock arrangements featuring straight electric guitar, as well as guitar with a variety of effects.