Marco Sfogli: answers the question... what is the secret juice in the amps for Impermanent Resonance

Marco Sfogli
Okay since I reached 70 emails asking what amps did I used on Impermanent Resonance...one end of the instrument cable went into the Axe FX II, the other end was a mystery until a few weeks ago! 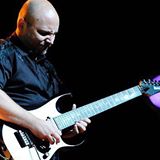 Marco Sfogli it took some time to find the email, here we go: the engineer said it was a Rectifier (pre serial n.500) through an oversize rectifier cab and an EVH head through a marshall cab from the late 60's, eventually with greenbacks in it. Overdrive pedals on both amps to taste. You got it!
Marco Sfogli