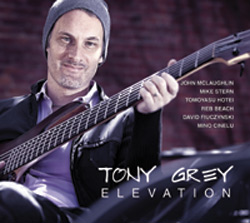 (Los Angeles) -  Besides being some of the greatest musicians ever known, Herbie Hancock, Wayne Shorter, Hiromi, John McLaughlin, Branford Marsalis, Zakir Hussain, Mike Stern and Steve Lukather all have something else in common. At one time or another, these legendary artists have counted on the supportive, melodic and propulsive bass playing of the amazing Tony Grey.  Artists of such stature and virtuosity do not trust just anybody to hold down the foundations of their music. They seek out the best for live performances and recordings. Time and time again they have turned toward the expertise and artistry of Tony Grey.

Tony wrote all the music for Elevation, also arranging his own version of “Some Day My Prince Will Come” featuring Fabrizio Sotti, along with the funky “Chick’s Chums” from Mahavishnu John McLaughlin. Nir Felder, Romain Collin, and Mino Cinelu all lend their musical mastery to Tony’s tracks.

Tony stands out as not only an immensely talented bassist, but one of most formidable writers of the next generation, whose music transcends genres, appealing not only to the attentive, longtime fan, but also creating a musical bridge for those new listeners about to enter the rhythmically-addictive world of Tony Grey.