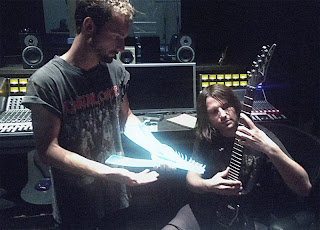 Long time friends and veterans of phantasmagoria, musician/producer Jorge Elbrecht and artist Max Hooper Schneider announce their first public intersection of sound and form. Click on the soundcloud link above to hear an excerpt of Jorge Elbrecht's soundscape.


The collaboration merges Schneider's creation of a life-sized glowing Beluga whale skeleton (currently fundraising on Kickstarter: http://www.kickstarter.com/projects/712313083/the-glowing-beluga-whale-skeleton) with Elbrecht's sonic interpretations of bone and phosphorescence. The resulting soundscape, an icy miasma etched with the click trains and burst pulses of the Beluga whale, expands the field in which the sculptural specimen is experienced and presents a dank, liquid ambience evocative of a paranormal field recording. The research behind the soundscape is extended further to syncopate with both the breathing behavior of the Beluga whale and the accompanying lighting system that refreshes the glow of the sculpture.
The 20-minute track loop signals the maximum duration of time the white cetacean can hold its breath, while the recurring apex of chord progressions reveals the Beluga taking small sips of air as it propels across the ocean surface.


The resulting combination of the installed sculpture and soundscape produce an unprecedented and affecting artwork that is scheduled to debut this fall at numerous venues in both New York and Los Angeles. 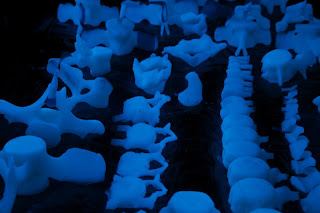 About Max Hooper Schneider:
Max Hooper Schneider is an artist holding a master's degree from the Harvard University Graduate School of Design. His work focuses on the agency of matter and the production of scientific knowledge and spans a wide range of media. He has recently completed a large-scale work for the Mongolian Land Art Biennial in the Gobi Desert and exhibited across many indoor and outdoor venues worldwide.

Max continues to collaborate with architects, scientists, and musicians and has solo shows this fall at Gallery 169 in Los Angeles and the Hudson Basilica in New York. He has been working on the glowing Beluga whale skeleton for the past year and will complete it this fall in tandem with the release of its sonic counterpart.


About Jorge Elbrecht:
Jorge Elbrecht has previously been involved with musical projects such as Violens and the NYC art company Lansing-Dreiden. He is currently a touring member of Ariel Pink's Haunted Graffiti. He has also helped make records for many other artists. Most recently he produced/mixed No Joy's Wait to Pleasure and he co-produced/mixed the forthcoming Au Revoir Simone record, Move in Spectrums. In addition to all of that, Elbrecht is teaming up with other artist/songwriters for a series of 7" releases in different styles and grouped album headings on Mexican Summer. In June of 2013 a split 7" with Ariel Pink, "Hang on To Life" was released. The next in the series is a collaboration with Caroline Polachek from Chairlift (the first issue of the electronic "Gloss Coma" series.) Another series, entitled "R.I.P", will be focused on ambient or environmental sound for places of rest--the installation site of the Glowing Beluga Whale Sculpture by Max Hooper Schneider being the first of these places.