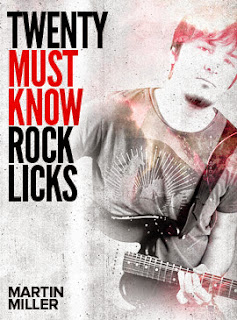 Martin Miller is back with his second '20 licks' package...the ultimate product for learning bite sized licks. This time we are exploring the world of Rock.

'Within this package you will find several soloing examples for three stylistically different rock tracks (a straight Rock track, a Rock ballad and a Bluesy shuffle). Each of the examples is roughly ordered by difficulty for each track. I tried to keep the level of difficulty a bit more intermediate for this release, as opposed to the previous lick-based instructional. That doesn't mean there isn't some crazy stuff going on, but I made sure there's something in here worth learning, no matter what level you're currently at'

Each lick comes in full speed audio and video, plus a slower speed so you can analyse every little detail! Also included are the 3 different backing tracks at different BPM's, giving you the backdrop to work on each lick at your own pace, as well as creating your own licks. As ever, accurate JTC TAB/Notation is included for each lick, plus Martin has written really comprehensive notes for each lick too.

Throughout each lick you will learn a load of ideas and techniques, including: string bending, legato, alternate and economy picking, open string licks......and that is just scratching the surface!

So, if you are serious about playing rock guitar then this is the perfect package to get stuck into learning. Watch the promo video below to get a little taster of what to expect!