Xander Demos: Is Screamer's "Plug In" Artist Of The Week, 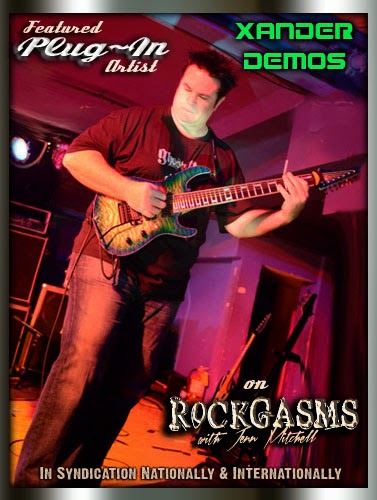 June 24, 2014 - PITTSBURGH, PA. -Metal shred guitar virtuoso has the honor of being this week's featured Screamer Magazine "Plug In" artist. According to the Screamer website, "Plug-In" is a 20-minute segment of 'RockGasms with Jenn Mitchell,' showcasing some of the hottest upcoming independent and unsigned bands/artists from around the world. Each band’s background is discussed and their latest tracks are played, along with links to all of their social media outlets, websites and how fans can purchase their music. Since 1987 Screamer Magazine has been a stalwart supporter of unsigned bands, so 'Plug-In' is a program we’re glad to get behind." Xander and his band XDB were featured on this week's show, which is available for streaming on demand at http://screamermagazine.com/plug-in/xander-demos/.

This Thursday, June 26th at 9pm ET, Xander will be the guest on "BS Live Rocks!" Xander is hard at work on two upcoming album releases, and is taking a break from the studio for this interview. Tune in LIVE at http://www.maxinkradio.com/ to get a behind-the-scenes glimpse into his recording process.
Xander Demos