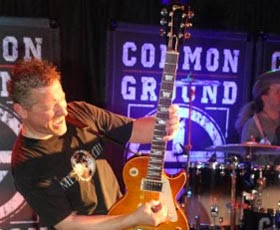 2. Could you describe your experience with Shrapnel Records and Mike Varney? Do you feel your Shrapnel Release, "Todd Duane" accurately represents you as a guitar player and composer?

Todd: I had been demoing songs for years. I had recorded at least 100 songs. I was still a practising musician as well, so I was continually being inspired. It was easy to record new material because most often it was based around a certain technique or musical idea I had been working on. The demo’s I created for my Shrapnel “Todd Duane” release were recorded with the thought that “this is going to be my début record”. I upgraded my studio to a Tascam DA-88 digital 8 track recorder and just started to “do it”. By this time my playing had matured to a certain level and my song writing took on a new light. One that highlighted “melody and simplicity” over “technique and innovativeness”. Of course I still had all my technique, but I wasn't writing songs solely based on that any more. I was just trying to write good songs… ironically this is what made the difference in getting signed to Shrapnel Records. Of course many fans of my previous more technically inspired demo’s felt let down on my début CD. I personally felt very happy with the songs and playing, because I knew I was still doing all the same crazy stuff I had always done, but in a more musical, mature style- its where I was musically. With the release of the Electrocution 250 CD we decided to go back to the early goofy, over the top, crazy and humorous song style demo’s I had once recorded.